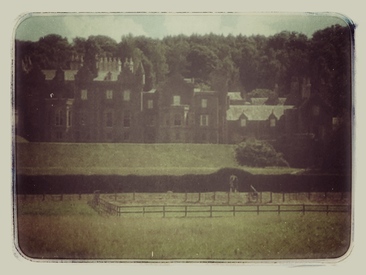 The Nineteenth Century Reading Group organised a daytrip for postgraduate students in the University of Edinburgh's School of Literatures, Languages and Cultures (LLC)  to Abbotsford House and Gardens, home of renowned novelist Sir Walter Scott, and Melrose Abbey on July 26th 2013. This trip was generously  supported by the LLC Graduate School’s Student-Led Initiative Fund and the LLC Graduate Council Working Party.

Abbotsford recently underwent a multimillion pound, three-year restoration, and only re-opened to the public in early July 2013. Situated on the south bank of the River Tweed in Melrose, Abbotsford was Walter Scott’s fond creation and family home. The group travelled to Abbotsford in the morning, and went on a guided tour of the newly refurbished House and Gardens, discovering such antiquarian delights as an oatcake from the Battle of Bannockburn, Rob Roy's broadsword, and the keys of Lochleven Castle. After a quick refueling pitstop of tea and scones, the group further explored the grounds, and paddled in the Tweed  before hopping back on the bus to travel to Melrose and visit its famous abbey. Melrose Abbey was the first Cistercian monastery established in Scotland; it also featured in one of Scott's most famous narrative poems The Lay of the Last Minstrel (1805). The daytrippers spent an idle hour wandering amongst the Abbey's ruins in the summer sunshine before the group journeyed back to Edinburgh that evening.